If i copy the skin from my head to the eyelashes i get some leaking.
The eyelashes does move much slower.

Even if i seperate only one loop around the eye i cant get a good result.

Can you show your Maya skinning settings?

Or, select the skinCluster, and in the attribute editor, show a screenshot of your “Smooth Skin Attributes”.

Also, when you run the command, did you not notice that you had an error in the script editor? Your video appears to be cropped, so I can’t read the error. When things go wrong, check your script editor for errors or warnings.

The error i get is this here.

Error: RuntimeError: file C:\Program Files\Autodesk\Maya2020\Python\lib\site-packages\pymel\internal\pmcmds.py line 130: The noMirror flag cannot be used when the source and destination skins are the same.

The skincluster does look the same on both heads. 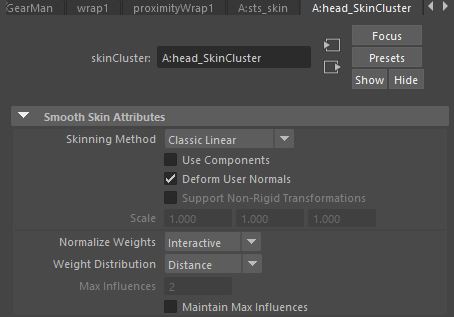 So… in your last screenshot, I can see “proximityWrap1” and “wrap1” in your geometry’s history. Is this correct? Is this your old geo, or the new copied geo?

What is the other input history in both geos?

Those are the connected eyelids.

But i had the same issue before i used the proxwrap and the wrap.

Is there more to the error? Sometimes when an error happens, there are more than just one line.

Make sure to copy/paste everything that happens when you run the copy skin command.

@oglu Can you upload a scene file directly at the point before you run the Copy Skin command? Something so I can reproduce this error?

Its the mGearman in the current state on Gumroad. You need the Geo and the Rig file.
Im using maya2020. 2

Follow me for posts on what I am creating.

If you’d like my help, please upload a scene file that is ready for me to test, that is currently in the state where you are experiencing the error. You can also possibly send me a zip file in a direct message.

I’m not going to assemble multiple files and guess whether I’ve set it up the same as you.

No problem i will do that. After my Kids are sleeping.

You have a PM.

I appreciate your help.

I fear you won’t like this reply. I need to be blunt here: Your scene is a hot mess!

None of the points below imply that I understand what originally went wrong or how. I’m just noting what I see at this time.

I strongly suspect most of your problems are because you are working with your geometry referenced in the rig scene. Try importing it instead.

You have a proximityWrap in the input of your head geometry AND your eyelashes. Both of those geometries are being driven by the pWrap, but the pWrap has no driver. Which makes me suspect that you tried to create the proximityWrap by selecting both geometries and then running the menu command, similar to a wrapDeformer. That isn’t how proximityWrap works. Watch the Autodesk tutorial and try it on a couple of spheres before trying it on a character rig.

The skinCluster isn’t even showing up in the input history. It’s there. If I delete the proximityWrap, it shows up in the history stack. But maybe because of the strange history stack, or possibly because of reference conflicts, the skinCluster is hidden behind a groupID node which appears to be referenced and which doesn’t even have any inputs at all. It’s no wonder mGear Copy Skin can’t copy the weights properly. The skinCluster exists, but it can’t find it. Neither can the user. If you open up the component editor, no skin weights even appear.

I can paint weights, but all the weights seem mangled and random, as if the vertex order had been changed. When I move the rig, it is clear the weights (or vertex order) are somehow corrupted.

Your transform node “A:head” is referenced. But the skinned shape node “headShapeDeformed” appears to be directly in the scene. If I directly open the geo file, the shape node is called “headShape”. So somehow there has been some weird replacement with the geometry.

The only recommendation I can give here is never to rig on referenced geometry unless you know what you’re doing and understand all the details about referencing and refEdits.

(This does not appear to be an mGear issue.)

Thaks for your honesty. You are absolutely right i have no clue what im doing. Those are my first babysteps.

I will start from scratch and take mor care for a clean scene. This will takesome days. I will come back and show what i have

Thanks that does help alot.
Cheers Oglu

Hopefully, you can reload your skinning from another version using the export skins. But I don’t know why the skinning is random and mangled.

(Use the ascii skin files, not binary. Then you can edit the text if you need to change namespaces.)

I assume it happened cause i changed something on the geometry. And messed up with the referencing.

I thought its the right thing to reference in the geo cause our pipeline here in the studio does work this way. But as you mentioned its only for TDs they know the inner workings.

Im not done yet but i can say Copy Skin does work now as expected.