Hello, I’m working on a project that has stylized eyes, and our modeler is trying to use mgear as a face rigging solution. Everything has worked fantastic, but we’re having a small issue with the eyelids, mainly because the eyes on the characters are flat, and the eyelids bulge outward during animations. This happens regardless of Linear or Quaternion calculation.

Because I am a new forum user, I can only show one embed, but it should give you an idea of what’s going on. 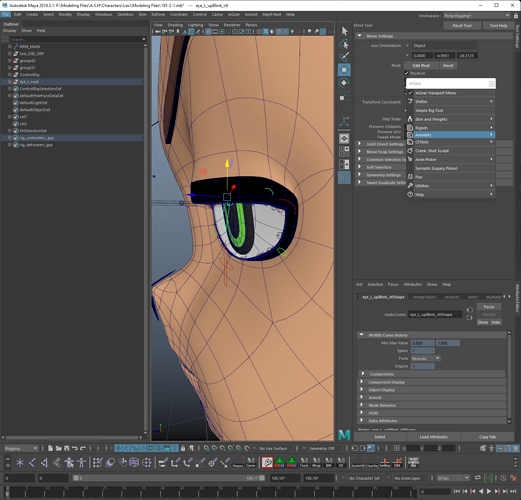 The eyelid is lifting way off the eye during blinking and other eyelid movements, giving the character a swollen face look. We tried messing with the settings but were unable to find any way to make it hug the eye more closely to look natural throughout the animations. Is there a way to resolve this issue, or is the script not designed for these kinds of eyes. Any suggestions would be appreciated, thanks!

EDIT: As is tradition, we managed to stumble upon a solution shortly after asking for support. For anyone else who runs into this issue, the solution we used was to simply move the eye constraints further into the head to reduce the curve.

When I had to do something similar, the solution I found was to provide mGear’s eye rig settings with a fake bigger spherical eyeball that roughly matched the flat eye surface