First of all, thank you guys for your hard work, for providing us this awesome Rigging Framework and for keeping this community a friendly place to learn and share!

I recently completed a biped character rig, following all videos available on mGear Youtube channel plus the most recent Facial Rig from Miquel’s Gumroad workshop (Thanks a lot!). I’m not a programmer but managed to make it work through all custom steps, except importing RBF’s.

Challenged myself to not use SHAPES or ngSkin tools this time, so maybe that’s already the solution for this issue (lesson learned, I’ll have it for the next projects) but still want to try understand why it’s not working.

TL;DR: So is it right to assume that the RBF manager don’t handle importing RBF setup data when driving multiple targets of a blendshape, or may I be missing something? (other than SHAPES tools haha)

In some of character’s geometries there is a blendshape stored with a bunch of targets for each correction needed in that geometry. The goal was to trigger on/off some of the targets when specific poses were reached.
It works well when I do it manually but it fails whenever I try to rebuild by importing RBF setup data (either import through UI or post custom step). 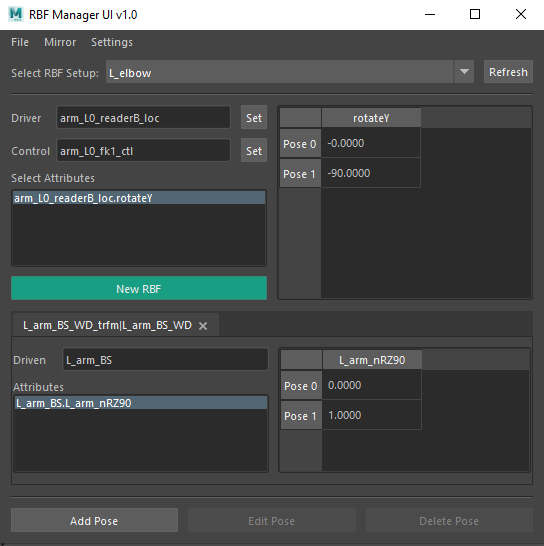 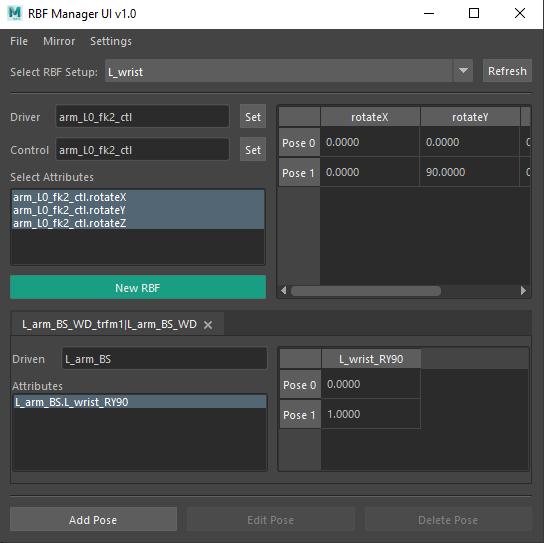 …are driving these two targets. 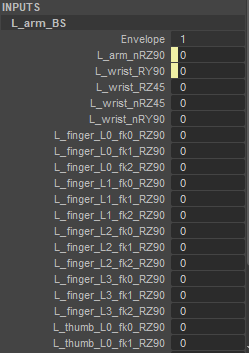 But when trying to import this setup, I got these errors… 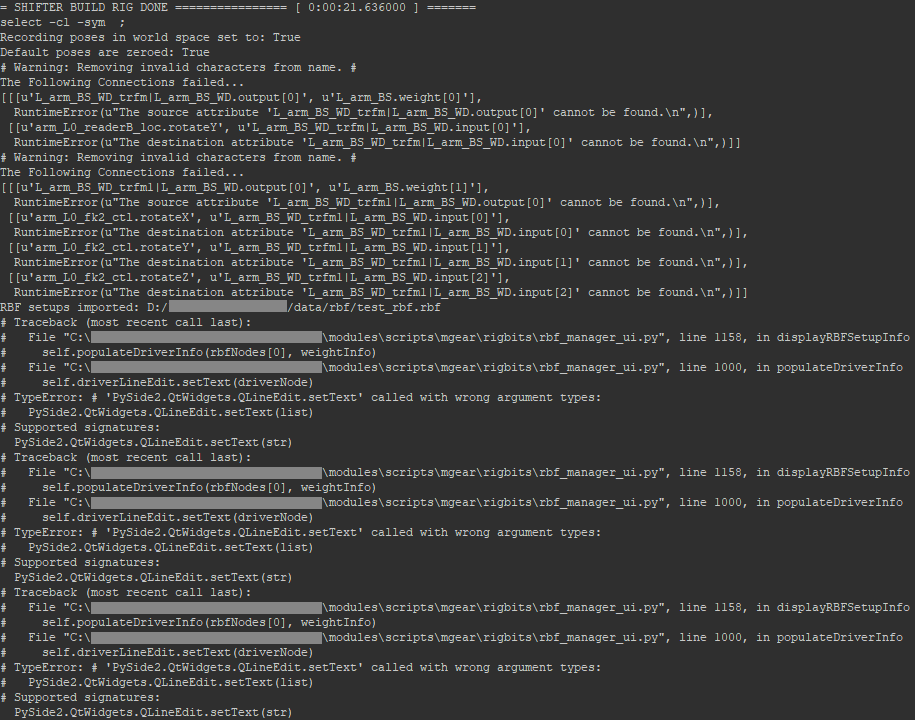 …and no connections in RBF, only setup names were imported. 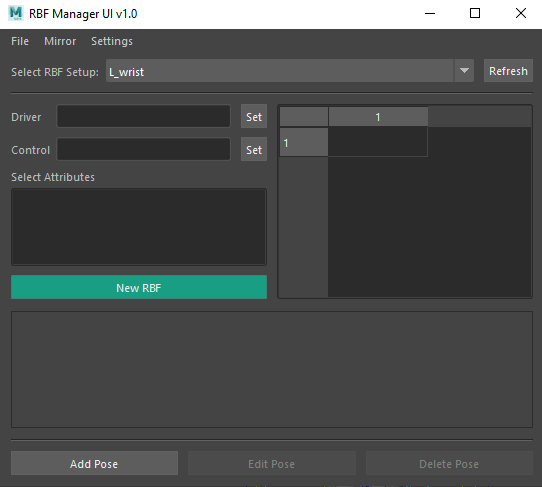 Didn’t realized why but, when there is only one RBF setup connected per blendshape, everything export/import/rebuilt well.

Thank you all in advance!
Cheers!

Thank you for reporting this issue.
You reported at the end, that when you have one RBF setup per blendshape, it works as expected. Can you elaborate on this with some imagery or details?

Also, what version of Maya and mgear do you have? For context.

Thank you for your support!

Can you elaborate on this with some imagery or details?

Also, what version of Maya and mgear do you have? For context.

So here is the situation I described before, 4 RBF setups… 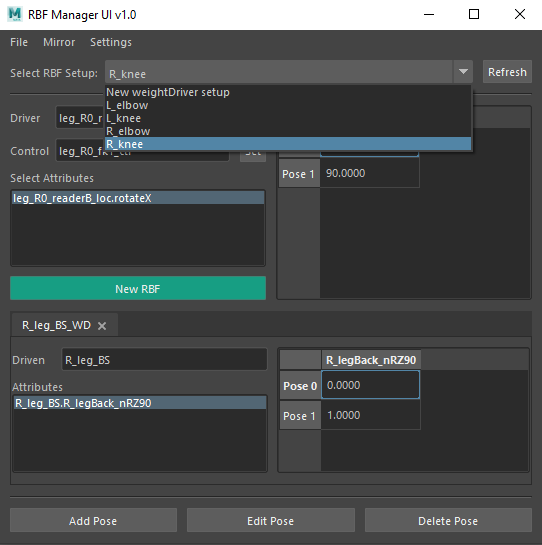 …each one driving only one target in a different blendshape, like this. 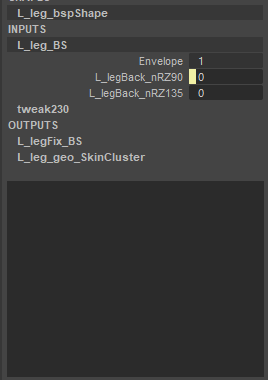 Rebuilding everything and importing RBF setup data returns no errors, everything works fine.

But then, trying to add a new RBF in a already existent setup, breaks the UI…

… and give me these transformation nodes.

When trying to rebuild importing RBF setup data in this condition, got these errors. 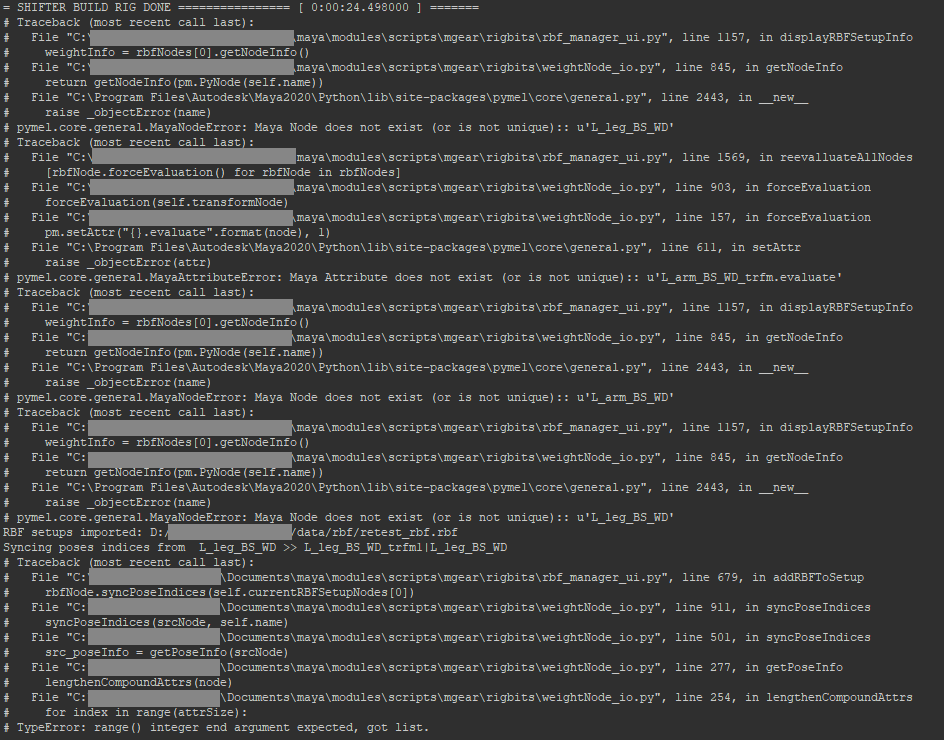 I tested rebuild it either from a new Maya session and also just deleting the rig and rebuild guide from selection. Same result.

For instance, I am going to implement the “hook technique” from @chrislesage (connecting RBF’s to attributes of a hook node and then connect to blendshape targets), seems the right way to solve it.

Thank you again for all support!

Hello @G.Robert,
Not sure if that would be helpful, but please check my previous thread: http://forum.mgear-framework.com/t/rbf-mirroring-issues/1526/5

I had similar issues driving other objects than mgear_ctls with RBF manager, what I did finally is using hook_ctls or driving joints directly where needed. Maybe it would be worth checking building RBF node in a custom step?
Usually, I use SHAPES, but you’re aware of it so no need for promotion

Great idea! If anything works I will definitely consider to build RBF’s in a custom step rather than import RBF setups. Thanks!

But I couldn’t open your previous thread, it seems to be private or inexistent…