Hey, I did a build from example quadruped rig and IK->FK switch doesn’t work. It works for Biped template though.

Adding to this question:

(I am loving this system btw

Thanks for the response! You say it’s possible… does the quadruped template just not have it in the current version (meaning I have to add it myself), or should it already be there when I build? I’m just trying to figure out if its absence is a bug or not. Thanks!

Hey, I’m not sure about previous versions how it was with quadruped template, I didn’t have to use it before.

But this code is working fine for toggle between IK and FK on 3jnt leg, I checked it:

Hello @azizk Sorry for the late reply I’ve been pretty offline lately. Switches depends on what your guides have in the Ik Array table thingy. You need to take into consideration as well that the Synoptic picker if you are doing anything custom you might need to to it on your side (I mean the picker itself). Anyway here is a snip of code you can use for the IK/FK switch/snap and another for the space switching with snap. IK/FK SWITCH with SNAP from mgear.synoptic.utils import ikFkMatch chara…

As an overall note I will say that the RightClick menu switching/snap capabilitties is probably not compatible with all things in mGear. With @Miquel we know that there are some inconsistencies between the right click menu, synoptic and other things but we will probably get to a point in time where this will dissolve the further we keep developing. Synoptic allows you to setup what are the matching controls on a switch whether the right click menu trying to generalize rules for this but not all components are ready for this or have been tested .

I was having the same problem and I discovered the guide grp was the problem.
1- I make a new guide group by creating a new control_01 and then delete the control_CO_root node.
2-Copy the global_Co_root(and its children from under the orig guide node)to new guide node(which will be called guide1 )

Then rebuild the rig and the right click FKIK matching works

we have ready a big improvement in the FKIK matching functionality and Rightclick menu
here is the main ticket that fixed the related issues https://github.com/mgear-dev/mgear_core/issues/62

Fantastic. Thanks for your hard work.

Edit: Nevermind! On a fresh release, and grabbing your latest 2 files, it works. So it’s something I changed in my own branch.

I grabbed your latest dagmenu.py and anim_utils.py and I’m getting an error when trying to space switch with the dagmenu.

Was there anything else I need to grab from the code to take advantage of this fix? I saw you mentioning naming the attributes based on name instead of type. So maybe you changed some code in the shifter modules?

(I’m working on an answer too.)

The rigs have new attr and message connections. You can’t use it without rebuild the rig with the latest shifter, sorry

I get it. But I didn’t see any of those files in the commit. Is there a way I can see what files changed?

Is it just the shifter module I also need?

yes, the commits are in shifter

Which repos should I get latest to use the shifter dagMenu fix on the FKIK matching? I’m on 3.6.5.

& updated the guide in my scene but getting error:

we have a new custom solver to simplify the graph, I am polishing it this week. it is working nicely, But it is not ready to use yet since I want to add some changes.

in order to work around it. You can force to use the old method, setting Vanilla_nodes = True
in the components/init.py line 229 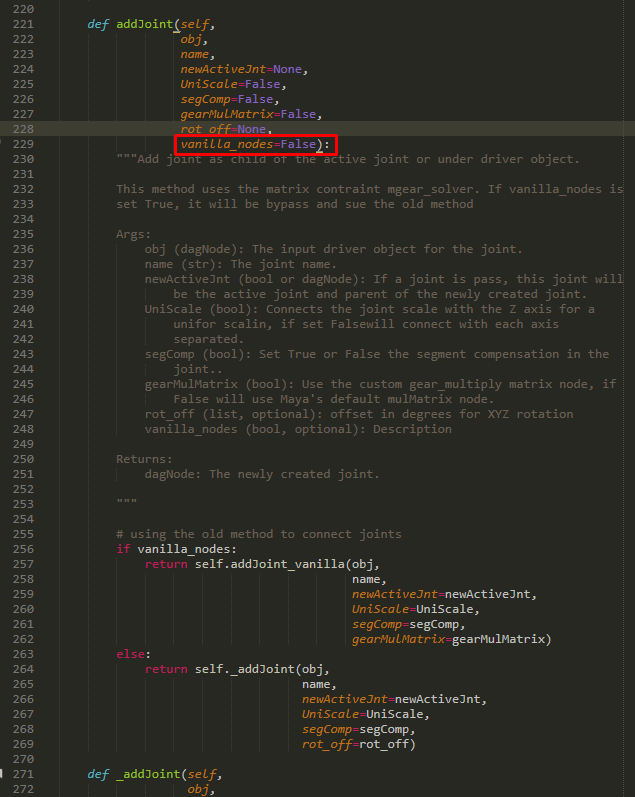 Should be ready tomorrow or the day after.

EDIT: here is the compiled solver for OSX in Maya 2020 https://we.tl/t-tTfBWPdOd7
Don’t use it for production. But at less you can try

the latest shifter and mgear_core commits are needed to use this solvers.

I will be posting a mGear 3.7 Beta next week