There is no feedback category and this is no feature request either. I hope it’s OK to post here. If not, pls let me know and I’ll post somewhere else.

So to get straight to it, I found RBF Manager to be a sensitive tool, easy to mess up, in some cases less-than-ideally named, and overall quite confusing. These are my issues with it. Hope it’s helpful feedback, but if it’s not, maybe I can get some advice on how to use it better, to get more reliable results.

I hope you will consider improving this tool in the future, and get it to be more intuitive and more robust, so it’s easier to understand and easier to use.

One more thing. OK, two more things!
Instead of ninja editing the above, I’ll add and ninja edit this one. Writing is rewriting. I’m just adding info or fixing or clarifying things, I’m not deleting content btw. OK, on to the actual content:

And 14. Last but not least. Depending on how you setup things, it’s very likely that the Driven objects will pop from pose to pose, instead of Interpolating. The safest setup seems to not include joints, but rather have the same object both “Driver” and “Control” [which makes no sense and it’s not what the tutorials advise]. But honestly, RBF is such a complete mess, it’s impossible to tell what might work and what won’t, and why driven objects pop from pose to pose.

Yes, I can see I’m the only one contributing here by myself, but since I’ve had such an adventurous time working with RBF Manager, I must continue to share my findings.

And lastly, I guess I should mention that iterating with RBF has been really time consuming. I couldn’t save and reload a setup to continue to work on it, so I had to always start from scratch, make a new, similar setup, and hopefully remember what I did wrong and correct it this next time.

Oh, and take a look at this. After some time spent with the tool, the UI starts to disintegrate. Values disappear, sometimes they reappear… this should be 21 I guess, like a Bonus! It also shows how pose 10 doesn’t exist anymore in the Driver, only in the Driven, as a result of bugged Delete Pose. 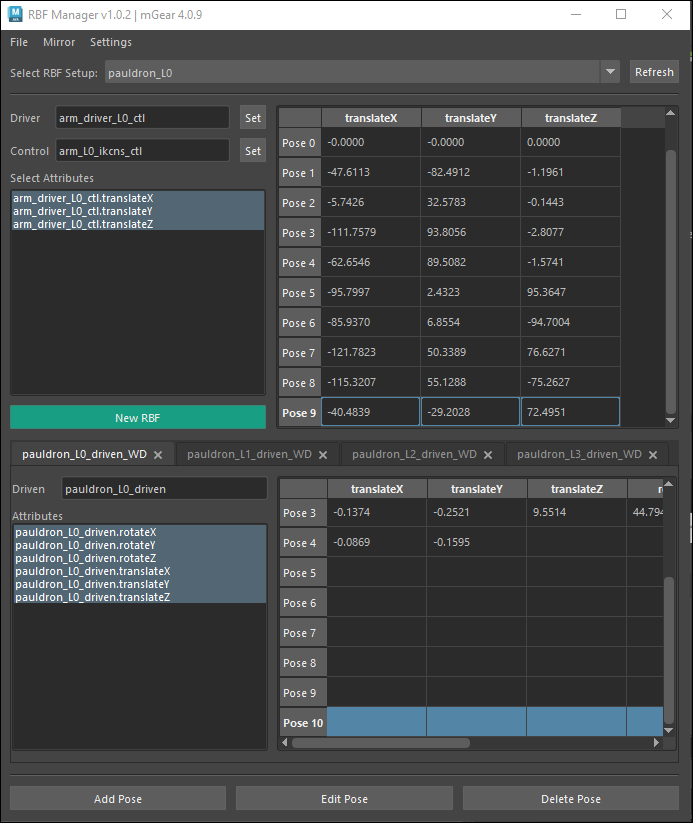 And very lastly, as a call for help, does anyone know of a similar pose correcting tool for Maya?
Cheers!

you could try SHAPES and its RBF setup possibilities

i also heard that that this version is great to use: 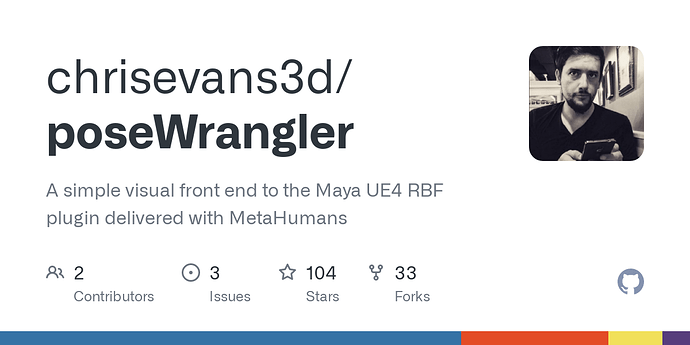 "
you need to get Epic Bridge, then export a MetaHuman out to Maya to get the RBF solvers, and then you can use the poseWrangler tool to handle RBFs
"

Thanks actoratwork, I will give poseWrangler a go. And probably I should try Brave Rabbit’s tool as well… hopefully their UI is more reliable, even if simpler.
Shapes on the other hand, I believe that’s only for Blendshapes? Does it support posing joints and controllers?
Edit: oh nvm, you’re right, I completely forgot about it. : ]
Cheers!

you might be right,regarding SHAPES…
Posewrangle should indeed be a good alternative untill Mgears RBF manager is more reliable