I was trying to figure out a way to implement a way to simulate breathing on a character with controls and couldn’t quite achieve it with just mGear modules. So I thought I’d ask you guys on your approach to such issues. 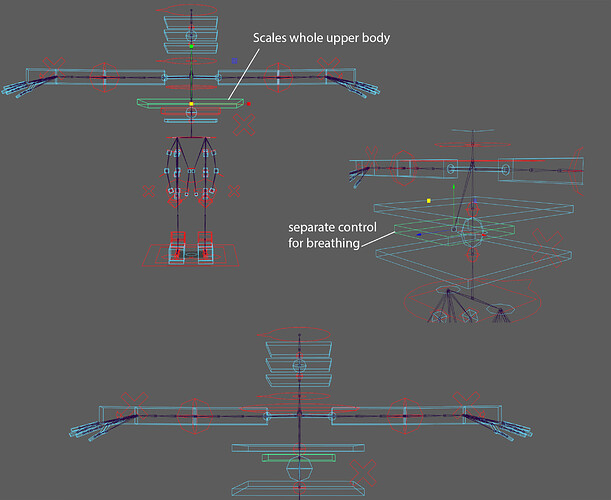 Question2500×2044 508 KB
Scaling all FK spine controls doesn’t work as it affects every upper body joint/module. Tangents do work in terms of movement, but scaling them also give incorrect results.
Is there a way to separate scaling for only certain regions like spine, forearm or do the modules always affect every item in their hierarchy?

One of the solutions I’ve tried is a separate control that is attached to the middle spine joint and play with it’s scale, however I quickly realized it’s not viable as it doesn’t affect shoulders/clavicles. It’s not that big of an issue to make custom RBF/SDKs but I just want to sort of automate this process in Guides stage.

So yeah, how do you approach making controls for breathing? Is it something that could be done at Rigging stage or would that be animators job to make it work with several controls and not just one?