(Edited: Another issue is that many joints, especially at the knee and elbow, ‘overlap’ and I’m not sure what joint to weight the mesh to.)

If you follow this you might get by but not everyone agrees on this. Now the number of joints do not matter, whether you are painting mGear rigs or other rigs but keep in mind that overlapping joints need to be labled correctly otherwise Mirroring or Copying weights wont work because Maya can’t predict into which joint he needs to transfer the weighting.

I’ll try to do a small video later today where I explain this better and explain why starting with body extremities is so important.

Now people will tell you to use ngskinTools and you should if you are not confortable with the points above.

Yes, here he is: That person who says you should get yourself used to NGSkinTools. When using native Maya painting instead of NGSkinTools, try to get yerself accustomed to painting in ‘post’-mode, instead of ‘interactive’. This prevents unwanted weights being constantly pushed around through the skin when you are assuming you are painting them away

I personally don’t use it besides really special cases and the main reason for that is that I am just really comfortable with Maya’s one but I understand that people might find this strange.

I work more or less like Jerome says: always unlocking only 2 joints at a time, or more when I am in advanced stages of skin painting; also, I use ‘interactive’. Going from bigger volumes to smaller details is a good way to break down skin deformations.

Here are a few other tips to add to what the others shared: 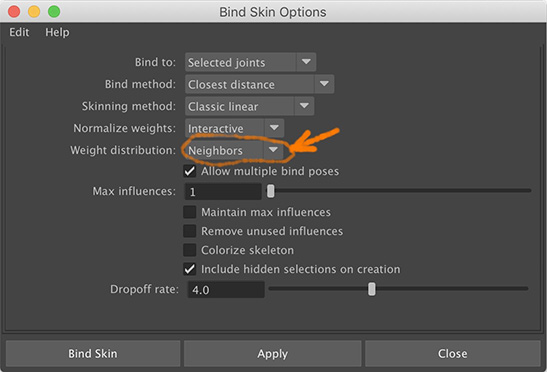 Never turn on “Maintain Max Influences”. If you let Maya do this for you, you’ll end up with swiss cheese for weights. Because Maya will take from your smallest weights, which often means your smoothest, most delicate areas will get destroyed. (Or else you must tediously manage locked weights.)
Even if you are rigging for games and you do need to limit your number of influences, you should manage it yourself as much as you can. (ngSkinTools has a better non-destructive way of limiting max influences. It’s safer to use, and easier to keep your body areas in separate layers.)

That’s good to know! Thanks! I have started limiting my weights because working for Unity and I saw some weird weights here and there, and had to do clean up manually. Yamahigashi’s script was really useful to detect the vertices that were giving me problems: https://gist.github.com/yamahigashi/635f16a5948ec0389139

I tried running that script and it gives me iteration errors. It checks ALL skinClusters, so it fails if it finds any skinned nurbs surfaces, for example.

I’ll share the one I heavily modified based on a script from Tyler Thornock. It only checks the meshes you have selected, so it won’t inadvertently check rigging components you don’t need to prune.

The other trick mine does, is that it does an extremely tiny prune when you run it. I noticed a weird bug(?) where you could paint a vertex all the weight to 0.0000 and it would still show up in the influences. A very tiny prune eliminates this, without modifying the weights in any noticeable way.

(Mine uses the OpenMaya API, but yours runs quite a bit faster on many meshes. I’ll have to see if I can speed that up using just the skinPercent() command instead!)

Thank you! Though could you clarify ‘bidding?’ (I’ll try out that method today, I’ve gotten a lot of good advice so far.)